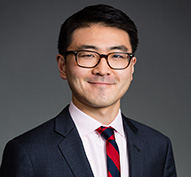 Timothy Sun is an associate in the New York office of Gibson, Dunn & Crutcher.  He is a member of the Litigation, and Appellate and Constitutional Law Practice Groups

Prior to joining Gibson Dunn, Mr. Sun served as a law clerk to the Honorable Michelle T. Friedland of the U.S. Court of Appeals for the Ninth Circuit and the Honorable Ronnie Abrams of the U.S. District Court for the Southern District of New York.

Mr. Sun is admitted to practice in the State of New York.