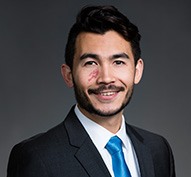 Mr. Takagaki received his Bachelor of Arts in Political Science and History from the University of California Los Angeles in 2011.