Are Sellers Locking Up Value by Using Locked Box Accounts?

Traditionally a locked box structure has been considered to be preferable from the perspective of a seller as it avoids the risk of a price reduction following completion, thus providing a seller with greater price certainty. In contrast, a completion accounts structure has generally been considered to be better for a purchaser as it allows price assumptions to be verified after completion and for adjustments to be made as necessary.

Too often in the MENA region, where deals generally take longer than in other developed markets and there is less understanding, acceptance and trust of the locked box structure, sell-side advisors have relied on these general rules rather than considering what structure would result in the highest price being achieved in any specific situation.

Under a simple completion accounts mechanism, the purchaser will pay the “initial” purchase price at completion (often based on estimated values of the asset/liability position at completion) and this will be adjusted following the preparation and agreement (or, in the event of a dispute, the determination by an independent expert) of the completion accounts.

In practice, the “final” purchase price may not be known for some time (usually up to three months) after the date of completion, depending on the mechanism agreed for finalising the completion accounts (i.e. to determine the actual adjustments as distinguished from those estimated at signing).

A locked box structure provides that the target is valued (and the purchase price is calculated) using a recent historical balance sheet dated before the date of signing the SPA.  This is often (but not always) taken from the target’s most recent set of audited accounts. The amounts of cash, debt and working capital are therefore agreed by the parties at the time of signing the SPA.

This mechanism requires the purchaser to value the target based on a historic set of accounts (the “locked box accounts”), in respect of which it will (generally) have no ability to adjust after completion. By way of compensation, however, the SPA would contain warranties (in respect of the period following the locked box date and prior to the date of signing) and undertakings (in respect of the period following signing and prior to completion) to the effect that no “leakage” (i.e. transfer of value to the sellers or their related parties) has occurred or will occur. If there is any leakage, it would normally operate as a $ for $ adjustment to the purchase price. It is important to note that this structure only protects the purchaser from extraction of value by the seller and does not protect against weakening trading performance (but it does confer the benefit of strengthening performance to the buyer).[2]

Accordingly, in a locked box structure the purchase price is fixed and the purchaser takes the risk (and benefit) of trading between the locked box date and completion.  To compensate the seller for running the business during this period, it is fairly common for the seller to require the purchaser to pay an additional amount (sometimes referred to as an “interest payment” or “ticker”) which accrues on a daily basis until the actual date of completion.

An SPA with a locked box structure would also contain certain categories of “permitted leakage” (i.e. permitted extraction of value by the seller) which are allowed following the locked box date without counting as leakage.

This structure can be simpler than using completion accounts as it enables parties to agree the treatment of any subjective items on the balance sheet prior to signing, and there is no post-completion adjustment, other than for any leakage. This can be of particular relevance in a competitive process.

THE ISSUE AT HAND

As stated above, under a locked box structure, the economic risk and benefit in the target pass from the seller to the buyer at a date before signing whereas under a completion accounts structure risk and benefit only pass upon completion. To put this another way, in a locked box structure the seller does not receive any benefit in respect of financial performance (e.g. increased cash balances) between the date of the locked box accounts and completion other than, perhaps, the “interest payment” described above which, in the MENA market, tends to be more in line with a corporate lending rate as opposed to a typical equity return. This is of particular relevance where the seller is a financial investor (e.g. a private equity house), as the success of any particular investment made by a financial investor (being the returns generated by the investment) is generally measured by a metric known as the internal rate of return (IRR) on monies invested (expressed as a per annum percentage). Once the value of the target has been determined and unless the interest payments (if any) are greater than or equal to the IRR (which would be highly unusual in the MENA market), the IRR, which takes elapsed time into account, will begin to decrease from the date of determination until the date the transaction completes.

In addition, deals based upon a locked box structure may take further time to execute than deals based upon a completion accounts mechanism. As the buyer will not have the contractual flexibility in the SPA to adjust the consideration post-completion for the level of specified assets and liabilities actually received (which is inherent in the completion accounts structure), it will normally wish to undertake detailed due diligence on the locked box accounts.

WHY THIS IS PARTICULARLY RELEVANT NOW

The market trend for M&A in the MENA region (as experienced by this author in the medium term) seems to be for a longer period elapsing than we have seen historically between a price being agreed between the buyer and the seller and completion occurring. The reasons for this differ in each transaction but could include:

This market trend seems to be particularly noticeable in the situation of competitive auctions where there may be several rounds of bids before a preferred buyer is chosen, thus leading to even further delay. It is important to note that in the context of a locked box structure this will also lead to an increase in the historical nature of the locked box accounts on which the price is based.

Another reason why this issue particularly affects the MENA market is that it is less common for buyers to be willing to pay an “interest payment” in a locked box structure or for such payment to be set at a relatively low level which does not fully compensate the seller. This would appear to be difficult to justify – after all there is a time value of money and a business with a higher cash balance is worth more than one without. Again, it is difficult to be certain as to why this is the case but reasons we have come across include:

Overlaid with the above, it is a well-known fact that in the MENA region there are several financial investors and family conglomerates holding assets which they will be looking to sell/exit in the short to medium future. Therefore the issues raised in this article are likely to become ‘live’ very shortly if they are not already being considered as part of such sales/exits.

If a seller believes that the financial performance of the business being sold will be strong in the period up to completion but for other reasons a locked box structure is still preferred (e.g. because it provides a “floor” to the price to be achieved) then it may be possible to take certain steps to increase the price which is received. Such steps could include the following:

Alternatively, a completion accounts structure could be proposed. As well as allowing the seller to benefit from the financial performance of the target business up to completion, this may also have the additional advantage of providing comfort to the buyer as to the financial status of the target business at completion. This would allow the buyer to agree to a higher price and ensure that maximum value is achieved. However, in order to ensure that typical seller concerns about using a completion accounts structure (i.e. delay and lack of price certainty) are allayed then it may be possible to take certain steps which could include the following:

As a compromise position, there is no technical/legal reason why it should not be possible to adopt a hybrid approach whereby a completion accounts structure would apply for a certain period between signing and completion (e.g. up to the month end immediately prior to signing or, perhaps, completion) with a locked box structure applying thereafter.

This should lead to a shortened timeline for ascertaining the final purchase price and, in certain situations, could lead to the final price being ascertained prior to completion.

Although not suitable for every situation (e.g. this would be difficult to apply where there is a high degree of uncertainty on when completion will occur) this approach would give the seller the benefit of the financial performance of the business up to the completion accounts date and would give the buyer comfort that (i) it will only be paying for the assets actually in existence on the completion accounts date and (ii) in the locked box period no value will be extracted from the business by the seller.

Although this novel approach could in certain circumstances benefit both the buyer and the seller, it is not something which is generally accepted in the market at present.

Too often in the MENA region, sell-side advisors have failed to consider what pricing structure would result in the highest price being achieved by the seller or to think outside of the box when contemplating this issue.

Hopefully in the future there will be a more nuanced approach taken when deciding what structure works best for any specific transaction. 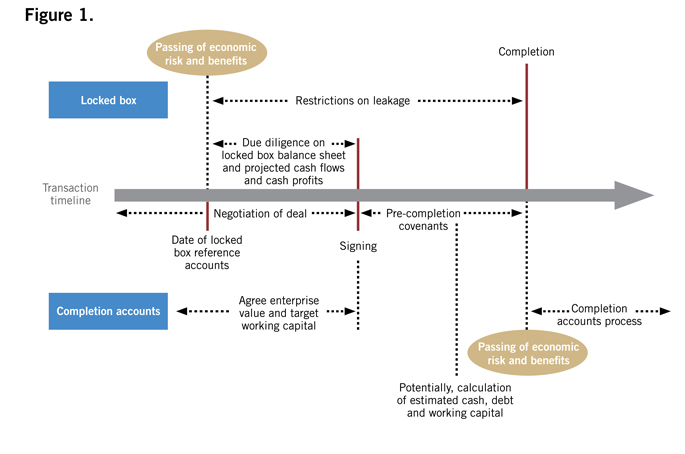 [1] See Figure 1 for a pictorial representation of the two structures.

[2] Please note that in the UK and other markets, the “interest payment” is typically based on the cash/earnings forecasted to be generated by the target business in the interim period which provides the seller with more equitable compensation, and so this issue is not as relevant.

Gibson Dunn’s lawyers are available to assist in addressing any questions you may have regarding the issues discussed in this update.  Gibson Dunn has been advising leading Middle Eastern institutions, companies, financial sponsors, sovereign wealth funds and merchant families on their global and regional transactions and disputes for more than 35 years.  For further information, please contact the Gibson Dunn lawyer with whom you usually work, or the following authors in the firm’s Dubai office, with any questions, thoughts or comments arising from this update.

Attorney Advertising: The enclosed materials have been prepared for general informational purposes only and are not intended as legal advice.