This September 2016 edition of Gibson Dunn’s Federal Circuit Update discusses the steep rise in appeals from the Patent Trial & Appeal Board due to the America Invents Act.  The Update also includes a practice tip regarding the procedure for seeking rehearing of an adverse panel decision.  Also included are summaries of the pending en banc case involving motions to amend claims during inter partes review as well as a trio of key recent decisions including two recent developments in Federal Circuit jurisprudence on patent eligibility under Section 101 and one recent decision on the application of common sense in an obviousness inquiry.

On September 16, 2012, the Leahy-Smith America Invents Act ("AIA") became effective and established the Patent Trial & Appeal Board ("PTAB") as a new administrative body for disputing patentability of patent claims at the U.S. Patent and Trademark Office ("PTO").

Below is a chart detailing Federal Circuit appeals filed from major origins for the past decade (further statistics available at http://www.cafc.uscourts.gov/the-court/statistics): 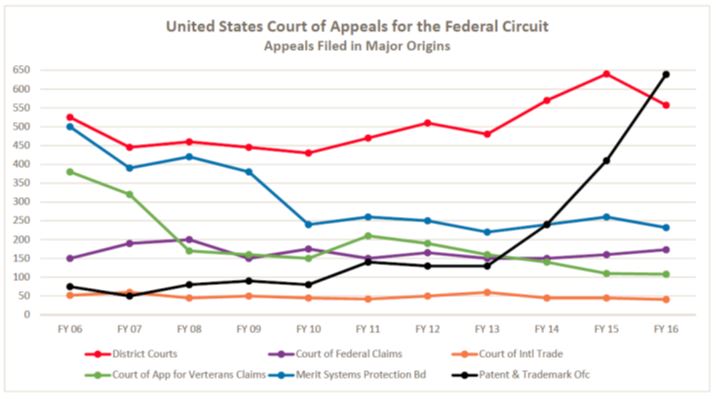 In re Aqua Prods., Inc., No. 15-1177 (Fed. Cir.):  Allocations of the burdens of persuasion and production when a patent owner moves to amend in an inter partes review ("IPR") proceeding.

The PTAB instituted an IPR proceeding against Aqua’s patent, which relates to automated swimming pool cleaners.  Aqua moved to amend the challenged claims to distinguish the cited prior art.  The PTAB, however, denied Aqua’s motion, determining that Aqua failed to carry its burden of showing patentability of the proposed substitute claims over the prior art of record.  On appeal, the PTO intervened to defend the PTAB’s decision.  The Federal Circuit affirmed, holding that the PTAB properly considered all of the arguments that Aqua had raised and that precedent upheld the PTAB’s approach of allocating to the patentee the burden of showing that the proposed amendments would overcome the prior art of record (decision available here).  Amicus briefs in support of neither party or in support of Aqua must be filed by October 5, 2016, and amicus briefs in support of the PTO must be filed by November 2, 2016.

Panel rehearing. The preferred contents and organization for a petition for panel rehearing are set forth in Federal Circuit Rule 40(a).  The petition for panel rehearing is decided by the original panel that issued the opinion and requires a majority of the panel to agree to rehear the case.  When a panel votes to grant a petition (other than to make mere language changes without change in result), the court will invite a response from the non-petitioning parties and will not issue the order granting the petition until ten working days following distribution of a response.  Rehearing before the panel may take place with or without further briefing or oral argument, as the court directs.

Plaintiff McRO, Inc. is the assignee of two patents covering methods of automating a 3-D animator’s task of synchronizing the lip and facial expressions of animated characters.  McRO asserted these patents against several video game developers and publishers.  The cases were consolidated for pre-trial purposes.  Following claim construction, the defendants jointly filed a motion for judgment on the pleadings under Fed. R. Civ. P. 12(c) that the asserted claims were directed to patent ineligible subject matter under Section 101.  The district court granted the defendants’ motion, finding that the claims were "drawn to the abstract idea of automated rules-based use of morph targets and delta sets for lip-synchronized three-dimensional animation," and that the claims preempted all uses of such a "rules-based" approach in the field of automated lip-synchronization.

The Federal Circuit (Reyna, J.) reversed the district court’s decision and deemed all asserted claims patentable under Section 101.  The court’s analysis focused on the first step of the Alice framework.  The court explained that "in determining the patentability of a method, [it] must look to the claims as an ordered combination, without ignoring the requirements of the individual steps."  Here, the court "look[ed] to whether the claims in these patents focus on a specific means or method that improves the relevant technology or are instead directed to a result or effect that itself is the abstract idea and merely invoke generic processes and machinery."  In finding that the claims focused on the former (and were thus not directed to an abstract idea), the court emphasized the specificity of the claimed process.  The claims, according to the court, "focused on a specific asserted improvement in computer animation, i.e., the automatic use of rules of a particular type."  The court similarly explained that the claims are "limited to a specific process for automatically animating characters using particular information and techniques and do[] not preempt approaches that use rules of a different structure or different techniques."  Because the court determined that the claims were not directed to an abstract idea–and were thus patent eligible–it did not address step two of the Alice framework.

Apple filed a petition for inter partes review of a patent owned by Arendi.  The patent at issue disclosed a computer program that analyzes information in a document to determine if that information can be used in another program to find a related piece of information.  By way of example, if a name is detected, a database can be searched for that name to find the corresponding address for that name.  The prior art reference disclosed detecting a phone number in an email and providing a drop down menu that would allow the user to add the phone number to an address book.  The PTAB found that the claims at issue would have been obvious because "it would be ‘common sense’ to a person of ordinary skill  in the art to search for the telephone number that is detected in a document when the ‘add to address book’ option disclosed in [the prior art reference] is selected."

The Federal Circuit (O’Malley, J.) reversed the PTAB’s decision, explaining that the PTAB misapplied Federal Circuit law on the permissible use of common sense in an obviousness analysis.  The court acknowledged that it is appropriate to consider common sense, common wisdom, and common knowledge in analyzing obviousness.  There are, however, at least three caveats to applying common sense in an obviousness analysis.  "First, common sense is typically invoked to provide a known motivation to combine, not to supply a missing claim element."  Second, in the one case in which common sense was invoked to supply a limitation that was missing from the prior art, "the limitation in question was unusually straightforward" (the missing limitation was an instruction to repeat the previous steps until the desired quantity was met).  Third, Federal Circuit cases repeatedly warn that "references to common sense–whether to supply a motivation to combine or a missing limitation–cannot be used as a wholesale substitute for reasoned analysis and evidentiary support, especially when dealing with a  limitation missing from the prior art references specified."  Because the PTAB’s presumption that adding the missing limitation would be common sense was conclusory and unsupported by substantial evidence, and the missing limitation was not a "peripheral" one, the court reversed the PTAB’s finding that the claims at issue were obvious.

After performing the Section 101 analysis as dictated by Alice, the court cited approvingly the district court’s result-vs.-solution analysis.  In granting summary judgment, the district court had noted that "there is a critical difference between patenting a particular concrete solution to a problem and attempting to patent the abstract idea of a solution to the problem in general."  While the court was careful not to adopt this language as controlling in a Section 101 inquiry, the court did describe it as a "helpful way of double-checking" the application of the Section 101 framework.  The fact that the claim language at issue was "result-focused" confirmed the correctness of the Section 101 analysis previously performed.

Gibson Dunn’s lawyers are available to assist in addressing any questions you may have regarding developments at the Federal Circuit.  Please contact the Gibson Dunn lawyer with whom you usually work or the authors of this alert:

Please also feel free to contact any of the following practice group co-chairs or any member of the firm’s Appellate and Constitutional Law or Intellectual Property practice groups: