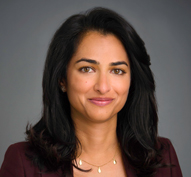 Zainab Ahmad is a partner in the New York office of Gibson, Dunn & Crutcher. She is Co-Chair of the firm’s National Security Practice Group and a member of the White Collar Defense and Investigations, Privacy, Cybersecurity and Data Innovation and Labor and Employment Practice Groups. Ms. Ahmad served as Senior Assistant Special Counsel in Special Counsel Robert S. Mueller’s Office following a successful career as a prosecutor and trial lawyer at the Department of Justice in both Washington, D.C. and the Eastern District of New York. As former Deputy Chief of the National Security and Cybercrime section at the U.S. Attorney’s Office in the Eastern District of New York, Ms. Ahmad supervised a unit of over 20 attorneys, investigators, and staff prosecuting sensitive counterterrorism, counterespionage and cybercrime cases.  Ms. Ahmad’s practice focuses on white collar defense and investigations, as well as regulatory and civil litigation challenges, such as matters involving corruption, anti-money laundering, sanctions and FCPA issues. She also advises clients on cybercrime and intellectual property issues, including handling investigations, enforcement defense, and litigation. She has extensive experience with a wide range of federal, state, and international cybersecurity laws, regulations, and standards.

Prior to joining Gibson Dunn, Ms. Ahmad was a prosecutor with the U.S. Department of Justice for 11 years.  She most recently served as a Senior Assistant Special Counsel in Special Counsel Robert S. Mueller’s Office from 2017 to 2019.  Prior, she served as an Assistant U.S. Attorney at the U.S. Attorney’s Office in the Eastern District of New York, where her roles included Deputy Chief of the National Security and Cybercrime section.  During her tenure, she prosecuted and supervised some of the most complex international terrorism investigations in the United States, focusing on al-Qaeda, ISIS and attacks against U.S. military personnel and U.S. diplomats abroad.  In pursuit of these extraterritorial national security investigations, she worked closely with the FBI, U.S. intelligence community, Department of State and Department of Defense, and she frequently traveled to Europe, the Middle East and Africa to negotiate with foreign law enforcement officials and regulators for access to evidence and testimony, and to collaborate with foreign counterparts regarding mutual legal assistance requests and extradition assurances.  Her work was chronicled in a The New Yorker feature article, “Taking Down Terrorists in Court.”

During her career, Ms. Ahmad was seconded twice to Washington, D.C., serving in 2016 as Counselor for Transnational Organized Crime and International Affairs and in 2017 as Acting Deputy Assistant Attorney General in Washington, D.C., where she was responsible for supervising about 70 prosecutors in three sections: Organized Crime & Gangs, Human Rights and Special Prosecutions, and Capital Cases, including the filter team handling the “Panama Papers”-related investigations.

Drawing on her experience, Ms. Ahmad has played an active role in the advancement of global cybercrime laws and regulations. She previously represented the DOJ at meetings of the World Economic Forum’s Cybercrime Workshop and participated in development of WEF’s Guidance on Public-Private Information Sharing Against Cybercrime. She also organized and led a Cybercrime Roundtable with former FBI Director James Comey and General Counsel and C-suite executives from various industries, including banking, media, health care and pharmaceutical companies, to discuss improved public-private partnership in combatting cybercrime.

Ms. Ahmad received her law degree in 2005 from the Columbia University School of Law, where she received the Hamilton Fellowship (full scholarship for academic excellence), was a James Kent Scholar and a Harlan Fiske Stone Scholar, and served as the Senior Editor of the Columbia Law Review.  She served as a law clerk for Judge Jack B. Weinstein of the U.S. District Court for the Eastern District of New York from 2006 to 2007 and for Judge Reena Raggi of the U.S. Court of Appeals for the Second Circuit from 2007 to 2008.

Webcasts - October 20, 2020 | Webcast: Trends in Government Investigations into Foreign Influence in the Private Sector: A discussion of FARA and related provisions
Client Alert - April 30, 2020 | Criminal Bankruptcy Fraud: Will the COVID-19 Crisis Make It the New Prosecutorial Darling?
Client Alert - April 8, 2020 | Fraud in the COVID-19 Age: Examining and Anticipating Changing Enforcement Activity
Webcasts - January 24, 2020 | Webcast: Challenges in Compliance and Corporate Governance
Firm News - December 17, 2019 | Crain’s Names Zainab Ahmad Among 2020 Notable Women in Law
Top
This website uses cookies to provide analytics on user traffic. By continuing to browse our website, you consent to our use of cookies as set forth in our Cookie Policy. However you may visit Cookie Settings to customize your consent.
Cookie SettingsACCEPT
Privacy & Cookies Policy