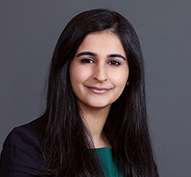 Iman Charania is an associate in the Palo Alto office of Gibson, Dunn & Crutcher. She currently practices with the firm’s Corporate Department.

Ms. Charania received her Juris Doctor degree from New York University School of Law.  At NYU, she served on the Editorial Board of the Journal of Legislation and Public Policy and as a research assistant for the Institute of Policy Integrity.  As a clinical student, Ms. Charania also participated in the filing of an amicus brief in the case Oracle v. Google on behalf of the Mozilla Corporation and other similarly situated technology companies.

Ms. Charania is admitted to practice law in the State of California.

University of Pennsylvania - 2017 Bachelor of Arts