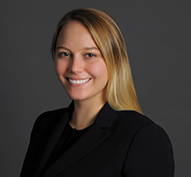 Lauren Dansey is an associate in the San Francisco office of Gibson, Dunn & Crutcher.  She is a member of the firm’s Litigation Department and currently serves as the vice chair of the firm’s global Associates Committee.

Ms. Dansey has a wide range of experience in several areas of law implicating different industries, legal issues, and factual scenarios.  Her specialty is managing complex discovery and assisting as trial counsel.  She has played a leading role in all stages of litigation and has been a key team member in multiple trials and final hearings.  Ms. Dansey regularly represents high-profile clients in the tech industry in a variety of lawsuits and government inquiries on a wide range of issues.  She has also represented Am 100 firms in legal malpractice suits.

She earned her B.A. in Political Science from University of California, Berkeley in 2011.  She wrote her senior thesis on Asian economic regionalism.  Prior to joining the firm, Ms. Dansey taught high school special education in Richmond, California through Teach for America.

Ms. Dansey is admitted to practice law in the State of California.