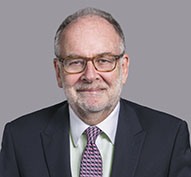 Charlie Falconer is an English qualified barrister and partner based in Gibson, Dunn & Crutcher’s London office.  The former UK Lord Chancellor and first Secretary of State for Justice spent 25 years as a commercial barrister, becoming a QC in 1991.  His practice focuses on complex commercial litigation, international arbitration and investigations.

In June 2003, he became the Lord Chancellor and the first Secretary of State for Constitutional Affairs.  He was called to the Bar (Inner Temple) in 1974 and was appointed Solicitor General in May 1997.  Between 1974 and 1997 he was a commercial barrister, and was involved in many significant commercial, industrial and financial issues of the day.

In 1997 he joined the Blair government as Solicitor-General, moving a year later to the Cabinet Office, becoming involved in all the critical issues which faced the government from 1998 until the 2001 election.

In 2001, after the general election, he became Housing, Planning and Regeneration Minister and in 2002 he became Criminal Justice Minister.  In both these jobs he was engaged in leading genuine public service reform, for example in relation to the planning system and the criminal justice system.

In 2003 he became Lord Chancellor.  In conjunction with the then Lord Chief Justice he worked out a detailed new relationship between the judiciary and the executive, which was embodied in the Constitutional Reform Act 2005.

His reform included the creation, for the first time, of a Supreme Court for the UK, the creation of a commission to appoint judges, making a full-time independent judge the Head of the Judiciary for England and Wales, and introducing an elected Speaker for the House of Lords.

In 2007 he became the first Secretary of State for Justice bringing together courts, prisons and justice policy for the first time.

Chambers UK 2017 recommends Mr. Falconer for Litigation. He is described as “a very bright man with huge reserves of energy.” He is also recognised by Legal 500 UK 2022 for Commercial Litigation and International Arbitration.

The Times has named Charles Falconer to The Times Law 100 (2012), its annual list of the 100 most influential lawyers in the UK.