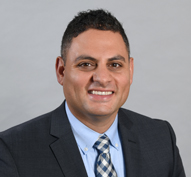 Michael Farag is an associate in the Los Angeles office of Gibson, Dunn & Crutcher.  He currently practices with the firm’s Business Restructuring and Reorganization Practice Group.

Mr. Farag focuses on complex restructuring and insolvency proceedings.  Prior to joining the firm, Mr. Farag served as a judicial law clerk in the United States Bankruptcy Court for the Central District of California, first for the Honorable Martin R. Barash, then for the Honorable Robert N. Kwan.

Mr. Farag earned his law degree in 2016 from the UCLA School of Law, where he completed the Business Law Specialization on the Mergers and Acquisitions Track.  He graduated from the University of Washington in 2006 with a Bachelor of Arts in Drama.  Prior to entering the legal profession, Mr. Farag worked in digital media and advertising.

Mr. Farag is admitted to practice in the State of California and before the United States District Court for the Central District of California.

University of Washington - 2006 Bachelor of Arts

Webcasts - February 10, 2022 | Webcast: Getting Ready for the Next Cycle: Strategies to Understand and Mitigate Risks to Real Property Leases, Interests and Rights of First Refusal
Top