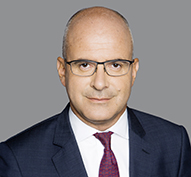 Restructuring – Mr. Farges heads the Business Restructuring & Reorganization practice in Paris, where he regularly helps companies through difficult times. He advises company shareholders with prevention proceedings, and acts for lenders of all types, including credit institutions and CLOs. In recent years he has developed a specific expertise in the restructuring of companies in LBO deals and has implemented pioneering solutions for them, such as “fiducie” or golden shares. He also works on aspects of restructuring litigation, both during and after the restructuring, and more generally on all types of commercial litigation.

Mr. Farges is ranked Band One in the Restructuring/Insolvency category by Chambers Europe 2022, where clients praise his “very strong involvement in cases.“ Previous editions mentioned that he displays “diverse skills on various complex matters.”. Market sources praise him as “smart, technical and creative in the solutions he proposes.” Previous editions alluded to him as “one of the leaders” in the French market, explaining: “he has great technical knowledge and a very creative approach. He is always looking for solutions and ways to move matters forward.” Clients describe him as “excellent from a technical point of view,” adding, “he is a good fighter in court, brave and independent. He defends his clients in every circumstance. He is very honest and has a great sense of humor.” Another source appreciates that “he has a clear vision and knows how to put forward tailored solutions.”

Furthermore, Legal 500 2022 ranks him in the tier one category and distinguished him to its Hall of Fame. He previously was consistently recommended as a Leading Individual for insolvency, as part of a “superstar team”, “highly experienced and provide[s] strategic and spot-on advice”. Previous editions praised him for being “highly regarded in the market” ; “an excellent lawyer with broad connections” ; “a great lawyer” ; a “real strategist” ; “aggressive with exceptional insight, and a pleasure to work with.” He had also previously been referred to as “remarkably intelligent and very smart.” Best Lawyers in France also consistently recommends him for Banking and Finance Law, Insolvency and Reorganization Law while IFLR 1000 has distinguished his as a Market Leader for France in 2021. and 2022.

Chambers Global 2022 recommends Mr. Farges in its Dispute Resolution: Litigation category and is praised for his negotiation skills with clients remarking that “really sharp” and “thinking outside the box.” Previous editions stated that he is “very respected in the courtroom” or that he has “a strong presence in court” and “fights very hard and defends the case well.” He is “widely praised by sources for his work on dispute resolution in the field of restructuring and is described as ‘a leading guy’ in that field. He also advises on disputes in the banking, construction and insurance sectors”. The directory also described him as, “an expert litigator in the context of financial restructurings ; [he] is widely respected in the French market. Sources praise his corporate knowledge and litigation capabilities”.

Legal 500 EMEA 2022 also recommends Jean-Pierre Farges in its Dispute resolution – commercial litigation category, highlighting he is “is very intelligent, very committed and endowed with high moral values, reliability and willingness to win loyally. Tenacious.” Previous editions stated that he is “highly experienced and provide[s] strategic and spot-on advice”, and has “great creativity in approaching issues and resolving disputes”. The directory also the “practice head”, as a “rainmaker”, an “excellent litigator”, “very commercial and client-oriented” and “an absolute star”. Benchmark Litigation (2019-2022) has consistently named him a Dispute Resolution Star along with Best Lawyers in France who has hailed him for Arbitration, Litigation and Mediation over the years.

Prior to joining Gibson Dunn in 2017, he practiced with Ashurst, creating a dispute resolution practice in Paris in 2001.  He became a partner there in 2004, where he also founded the restructuring practice in Paris.

A member of the Paris Bar since 1995, Mr. Farges graduated in 1994 from the University of Paris I (Panthéon-Sorbonne) with a Doctorate in private international law and arbitration; with a Magistère (postgraduate degree) in private and public economic law; and with a DESS (postgraduate degree) in business and tax law. He was a winner of the Mooting Competition for Lawyers of the French Supreme Administrative Court and Supreme Appeals Court–Secrétaire de la conférence des avocats à la Cour de Cassation et au Conseil d’Etat.

Mr. Farges is fluent in English.