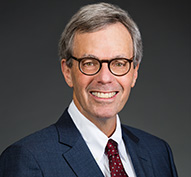 Mr. Goldsmith is consistently ranked as one of the top Securities Regulatory and Enforcement attorneys in the nation by Chambers USA: America’s Leading Lawyers for Business, Institutional Investor’s Benchmark Litigation Guide and The Best Lawyers in America©.  Best Lawyers named him New York City Securities Regulation “Lawyer of the Year” for 2015 and 2018, in addition to 2014 New York City Litigation ‒ Securities “Lawyer of the Year.”  Mr. Goldsmith was also recognized by Washingtonian Magazine as one of Washington’s Top Lawyers for securities law.  Chambers notes that Mr. Goldsmith is well regarded for his background at the SEC and FINRA.  That he is an “exceptional lawyer” having “terrific practical implications for his advice as well as his credibility within the SEC,” and has an “ability to keep the big picture in mind while paying attention to the details.”

Mr. Goldsmith is a frequent speaker on securities enforcement and regulatory issues at industry, legal and media sponsored conferences.  He has also authored and co-authored numerous securities industry related articles.

Mr. Goldsmith joined Gibson Dunn in 2006 after serving as Executive Vice President for Enforcement of the National Association of Securities Dealers (NASD) now FINRA, the primary private-sector regulator of the country’s securities industry.  Mr. Goldsmith was NASD’s top enforcement official responsible for formulating its national enforcement policy and overseeing investigations and cases.  Prior to his 10-year tenure at NASD, Mr. Goldsmith served as Chief Litigation Counsel at the SEC where he was responsible for all enforcement litigation brought by the agency.

Prior to the SEC, Mr. Goldsmith was a litigation partner with a Washington, D.C., law firm and served as a law clerk to a federal district judge.

University of Pennsylvania - 1972 Bachelor of Science