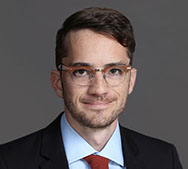 Alex Harris is an associate in the Los Angeles office of Gibson, Dunn & Crutcher.  He currently practices in the firm’s Litigation Department.  Mr. Harris focuses on appellate and intellectual property litigation.

Prior to joining the firm, Mr. Harris served as a law clerk to the Honorable Raymond M. Kethledge of the United States Court of Appeals for the Sixth Circuit.  He received his law degree from Stanford Law School, where he conducted advanced clinic coursework in Supreme Court litigation and edited the Stanford Technology Law Review.

Mr. Harris has argued before federal and state courts, at the trial and appellate levels, in paid and pro bono cases.  He has also served as Continuing Legal Education faculty and his work has appeared in the Maryland Journal of International Law and the Washington Legal Foundation’s Legal Opinion Letters.

Mr. Harris is licensed to practice law in the State of California and before the U.S. Supreme Court, the U.S. Courts of Appeals for the Federal, Sixth Circuit, and Ninth Circuits, and the U.S. District Courts for the Northern and Central Districts of California.