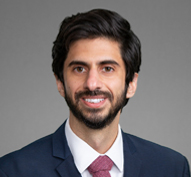 Prior to law school, Mr. Hassan worked on numerous Endangered Species recovery programs at the state and federal level, for the Departments of Interior and Defense. He received his Bachelor of Science in Biological Sciences in 2013.

Mr. Hassan is admitted to practice law in the State of Texas.