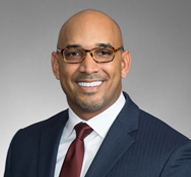 Andrew LeGrand is a Dallas partner with extensive experience in a broad range of complex commercial litigation. He principally focuses on class actions and other high-stakes disputes, and he has successfully represented corporate clients—both inside and outside of the courtroom—in matters across various disciplines, including litigation involving claims under the consumer-protection, product liability, and antitrust laws.

Mr. LeGrand is also active in his community. He was a member of the Dallas Regional Chambers’ Leadership Dallas Class of 2018 and a member of the Dallas Association of Young Lawyers 2016 Leadership Class; he serves on the Board of Directors for Hope Cottage Pregnancy and Adoption Center and the Cedar Hill Economic Development Corporation; and he is a volunteer baseball coach. He also serves as an adjunct professor at the UNT Dallas College of Law, where he teaches legal writing.

Mr. LeGrand earned his law degree from Columbia Law School, where he was an editor of the Columbia Law Review and a Harlan Fiske Stone scholar. He was elected by his peers to serve as the graduation speaker for the J.D. Class of 2009. As an undergraduate, Mr. LeGrand obtained dual baccalaureate degrees in English and African American Studies from the University of Oklahoma. He graduated summa cum laude, Phi Beta Kappa, and he was awarded the Letzeiser Award, which is given annually to three outstanding graduates. Mr. LeGrand holds a master’s degree and a doctoral degree from Teachers College, Columbia University. He worked in education before beginning his legal career.

University of Oklahoma - 2004 Bachelor of Arts