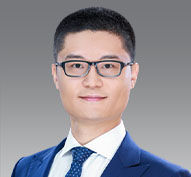 Zhiyao Li is a corporate associate in the Beijing office of Gibson Dunn.  He is a member of the firm’s Mergers & Acquisitions and Private Equity Practice Groups.  Mr. Li advises global and Asian companies and investment funds on cross-border M&A transactions, strategic acquisitions and investments, private equity transactions, pre-IPO financings, joint ventures, PIPEs, and other securities and general corporate matters.

Prior to joining Gibson Dunn, Mr. Li worked at a major Chinese TMT company as a senior legal counsel in Beijing and at two other leading international law firms as an associate in Hong Kong and Beijing.

Mr. Li received his Juris Doctor in 2016 from Georgetown University Law Center, where he was a member of the Dean’s List.  While in law school, he served as a judicial intern to the Honorable Stefan R. Underhill in the U.S. District Court for the District of Connecticut and a legal extern at the Federal Trade Commission and the Financial Industry Regulatory Authority.  Mr. Li received his Bachelor of Arts in 2013 from Beijing Foreign Studies University.

Mr. Li is admitted to practice in the State of New York.  He is native in Mandarin and fluent in English.