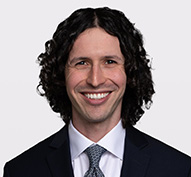 NoahLani Litwinsella is an associate in Gibson, Dunn & Crutcher’s Denver office.  He is a member of the Firm’s Litigation Department, and he works with the Intellectual Property Practice Group.

Prior to law school, Mr. Litwinsella earned his undergraduate degree from Whitman College with majors in Biology and Art, and he spent a year as a sponsored competition rock climber.  Mr. Litwinsella is a licensed Emergency Medical Technician in the State of California and holds a Wilderness Emergency Medical Technician certification through the National Outdoor Leadership School.

Mr. Litwinsella is admitted to practice law in the State of Colorado and before the United States Patent and Trademark Office.