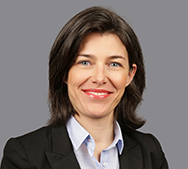 Judith Raoul-Bardy is a French qualified partner in the Paris office of Gibson, Dunn & Crutcher, where she serves as a member of the firm’s Corporate transactions, Mergers & Acquisition and Private Equity Practice Groups.

Ms. Raoul-Bardy focuses on cross-border and domestic mergers and acquisitions, including strategic investments and private equity transactions. She has experience in advising French and international corporations on matters relating to external growth, cross-border joint-ventures and reorganizations, outsourcing, as well as major investment funds on capital investment and capital development transactions. She has advised clients from various industries, including telecoms, media and entertainment, banking and finance, fashion and consumer products, in the establishment, acquisition, restructuring, and sale of their French operations.

Legal 500 EMEA ranks Ms. Raoul-Bardy for Mergers & Acquisitions, category in which she has been described as a « key practitioner » since 2020. Best Lawyers in France also consistently recommends her for Corporate transactions.

Admitted to the Paris Bar, Ms. Raoul-Bardy received a Magistère – DESS-DJCE (post-graduate degree) in Corporate Law from University of Paris II – Panthéon-Assas in 2003. She also graduated with a master’s degree in Business Law (Hons) from the same university in 2002.

She speaks French and English fluently.

Ms. Raoul-Bardy has advised on significant matters for the following clients: