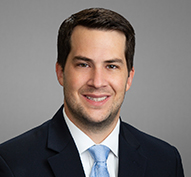 James Robertson is of counsel in the Houston office of Gibson, Dunn & Crutcher, and a member of the firm’s Mergers and Acquisitions, Oil and Gas, Private Equity and Energy and Infrastructure practice groups. He primarily represents exploration and production companies, midstream companies, private equity clients, and other financial institutions in complex transactions across the energy sector, with a particular focus on acquisitions, divestitures, and joint ventures involving domestic upstream and midstream oil and gas assets.

Most recently, Mr. Robertson was recognized by Best Lawyers: Ones to Watch in America™ for 2023 (Oil and Gas Law).

Bridging the Divide, April 2019 issue of the Oil and Gas Investor.

The Basics of Like-Kind Exchanges of Oil and Gas Properties, July/August 2012 issue of The Landman, the official publication of the AAPL.

How Bankruptcies May Affect Parties with Interest, November 9, 2015 issue of the Texas Lawyer.

University of Texas - 2007 Bachelor of Science