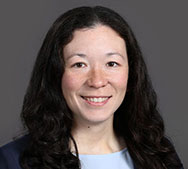 Courtney Wang is a corporate associate in the San Francisco office of Gibson, Dunn & Crutcher, where she currently practices in the firm’s Technology Transactions Practice Group.

Ms. Wang earned her J.D. from Berkeley Law School in 2020, where she was a member of the Berkeley Veterans Association and Queer Caucus, and served as an Article Editor and as the Internal Supervising Editor of the Berkeley Journal of International Law.  Ms. Wang received her B.A. in English from George Washington University in 2007.

Prior to attending law school, Ms. Wang was a Surface Warfare Officer in the U.S. Navy.  Her deployments included service as one of three Officers of the Deck running counterpiracy operations aboard a destroyer in the Gulf of Aden, and as the Anti-submarine Warfare Officer for a carrier strike group supporting air strikes on ISIS in Syria.