New York Updates Law on Recognition of Foreign Country Money Judgments to Bring in Line with Other U.S. Jurisdictions

On June 11, 2021, New York Governor Andrew M. Cuomo signed into law a Uniform Foreign Country Money Judgments Act (the “2021 Recognition Act”), amending New York’s Uniform Foreign Country Money-Judgments Recognition Act of 1970 (the “1970 Recognition Act”).[1]  The bill was designed to update and bring New York’s existing legislation in line with the revisions proposed by the Uniform Law Commission in 2005.[2]  With this enactment, New York follows a growing number of U.S. states that have modernized their recognition acts over the last decade.

I. Overview of Recognition of Foreign Judgments in the United States

There is no federal law governing recognition of foreign judgments in the United States.  However, the rules are broadly similar across all 50 U.S. states and the District of Columbia, providing for recognition of foreign judgments that are final, conclusive, and enforceable where rendered.  Over the last 60 years, a majority of U.S. states have codified their rules on recognition, following initially the Uniform Foreign Money Judgments Recognition Act of 1962 (the “1962 Uniform Act”) or now increasingly the Uniform Foreign-Country Money Judgments Recognition Act of 2005 (the “2005 Uniform Act”).

The 1962 Uniform Act was designed to increase the predictability and stability in this area of the law, facilitate international commercial transactions, and encourage foreign courts to recognize U.S. judgments.[3]  Notably, the 1962 Uniform Act did not prescribe any enforcement procedure, providing instead that a foreign judgment, once domesticated, is enforceable in the same manner as the judgment of a court of a sister U.S. state, which is entitled to full faith and credit.  That is still the prevailing rule today.

The 1962 Uniform Act defined certain threshold requirements for recognition and outlined certain mandatory and discretionary grounds for non-recognition.  For example, the recognizing U.S. court was directed to consider, inter alia, whether the judgment was rendered under a judicial system that provides for impartial tribunals and procedures compatible with due process; whether the foreign court had personal and subject matter jurisdiction; whether the defendant received sufficient notice of the proceedings to mount a defense; whether the judgment was obtained by fraud; and whether the cause of action or claim for relief on which the judgment is based is repugnant to the public policy of the recognizing state.

In 2005, the Uniform Law Commission issued the 2005 Uniform Act.[4]  Its purpose was to update and clarify the 1962 Uniform Act and “to correct problems created by the interpretation of the provisions of that Act by the courts over the years since its promulgation” while maintaining “the basic rules or approach.”[5]  In particular, the 2005 Uniform Act created new discretionary bases for non-recognition, updated and clarified the definitions section, clarified the procedure for seeking (and resisting) recognition of a foreign judgment, expressly allocated the burden of proof, and established a statute of limitations for recognition actions.[6]

Since 2007, a growing number of U.S. states have enacted the modernized 2005 Uniform Act (see map below).  As of June 2021, 27 states and the District of Columbia have adopted the 2005 Uniform Act, while one state has introduced this legislation.[7]  Another 11 states and the U.S. Virgin Islands currently still apply the 1962 Uniform Act.[8]  In the remaining 12 states, the recognition of judgments remains primarily a matter of common law or unique statutory provisions.

Law on Recognition of Foreign Judgments in the United States 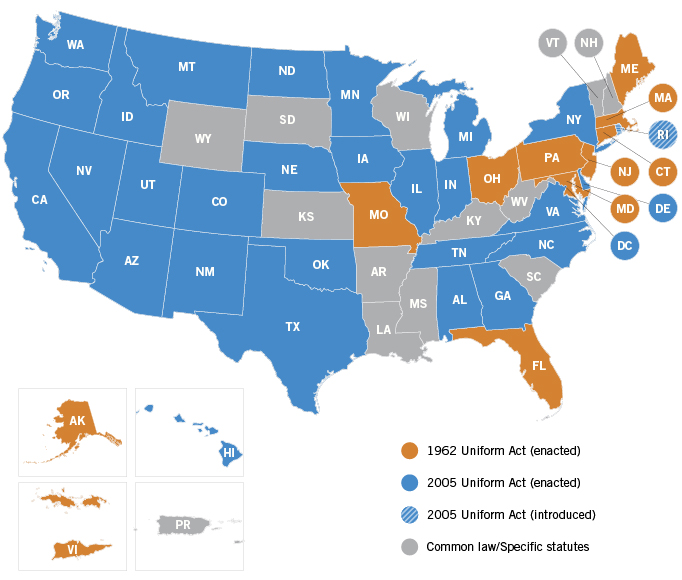 II. Overview of Recognition of Foreign Judgments in New York

With the enactment of the 2021 Recognition Act, New York largely leaves intact the legal framework established by the 1970 Recognition Act while adopting the key updates from the 2005 Uniform Law:

As with the 1970 Recognition Act, the 2021 Recognition Act applies to any foreign judgment that is “final, conclusive and enforceable” where rendered.[21]  It does not apply to a foreign judgment for taxes, a fine or penalty, and it further clarifies that it does not apply to a “judgment for divorce, support or maintenance, or other judgment rendered in connection with domestic relations.”[22]  Within those defined limits, the 2021 Recognition Act will apply to all recognition actions commenced on or after the effective date of the act (i.e., June 11, 2021)[23] even if the relevant transactions or proceedings in the foreign country took place before then.

As noted above, the 2021 Recognition Act provides certain definitional, procedural, and substantive changes that will impact judgment creditors and debtors litigating recognition in New York courts.

Many of these revisions will benefit both parties by providing greater clarity and precision about the procedural mechanisms and substantive arguments they can plausibly invoke in a recognition proceeding.  Some of the revisions, like the statute of limitations, reduce the incentive to forum-shop where foreign law provides for a shorter effectiveness period than New York law.

The most immediate effect of the 2021 Recognition Act will be felt on the scope and complexity of litigation.  As the Sponsor Memo noted, the 2021 Recognition Act “revises the grounds for denying recognition of foreign country money judgements to better reflect the even more varied forms of judicial process on the modern global stage.”[24]  Notably, the 2021 Recognition Act will permit judgment debtors to challenge foreign judgments based on proceeding-specific concerns so as to ensure the foreign judgment being recognized has adhered to fundamental principles of due process that the New York courts have a vested interest in protecting.  This was previously more difficult to do where only systemic (as opposed to proceeding-specific) due process considerations could be considered in denying recognition.[25]  The inclusion of proceeding-specific grounds, which will inevitably expand the range of arguments a judgment debtor can now raise, will likely increase the number of foreign judgments denied recognition in New York courts.

These additional defenses will require greater sophistication by both judgment creditors and debtors in recognition actions in terms of what kinds of foreign legal and expert evidence to marshal.  At the same time, these defenses give the New York courts additional bases to ensure that they only recognize judgments that result from a fair and impartial proceeding.

[11]   See Letter from the Uniform Law Commission to the Chairmen of the New York Assembly Judiciary Committee, dated March 11, 2021, at 2.

Gibson Dunn’s lawyers are available to assist in addressing any questions you may have regarding these issues. Please contact the Gibson Dunn lawyer with whom you usually work, any member of the firm’s International Arbitration, Judgment and Arbitral Award Enforcement or Transnational Litigation practice groups, or the following: