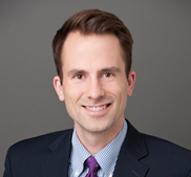 Peter M. Wade is Of Counsel in the New York office of Gibson, Dunn & Crutcher.  Mr. Wade practices in the firm’s Litigation Department, with a primary focus on complex commercial and business litigation, including breach of contract actions, fraud claims, M&A litigation and fiduciary duty claims, and related shareholder class and derivative actions.  Mr. Wade has had significant experience representing clients in a wide range of industries in state and federal courts and at both the trial and appellate levels.  He also serves on Gibson Dunn’s New York Community Affairs and Hiring Committees.

Mr. Wade received his Juris Doctor in 2012 from Columbia Law School, where he was named both a James Kent Scholar and a Harlan Fiske Stone Scholar.  He received his Bachelor of Arts from the University of Virginia in 2005.

Mr. Wade is admitted to practice law in the State of New York, as well as in the U.S. District Courts for the Southern and Eastern Districts of New York and the U.S. Court of Appeals for the First Circuit.

University of Virginia - 2005 Bachelor of Arts