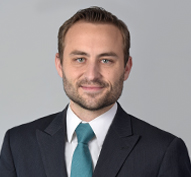 Brian W. Anderson is a litigation associate in the Orange County office of Gibson, Dunn & Crutcher where he is a member of the firm’s Litigation Department, the Intellectual Property Practice Group, and the Class Action Practice Group.  Mr. Anderson’s practices focuses on civil litigation in various substantive areas of law as well as intellectual property counseling, particularly trademark and copyright matters.

* Includes experience from prior to joining Gibson, Dunn & Crutcher LLP.

Mr. Anderson has also spoken on issues of trademark and copyright including presentations to the Intellectual Property Section of the Orange County Paralegal Association and to groups of attorneys and small business owners.

Mr. Anderson earned his law degree in 2017 from the UCLA School of Law where he was the Deputy Chief Managing Editor of the Journal of International Law and Foreign Affairs. During law school, Mr. Anderson also served as International Chair of Student Chapters, overseeing all student chapters of the J. Reuben Clark Law Society, worldwide. He graduated in 2014 from Brigham Young University with a Bachelor of Arts Degree where he was a dual major in International Relations and Russian. Having lived in Ukraine for two years, Mr. Anderson maintains conversational Russian language skills.  Prior to joining the firm, Mr. Anderson was an associate with Irell & Manella LLP.

Mr. Anderson is a member of the California Bar and is admitted to practice before the U.S. Court of Appeals for the Federal Circuit as well as the United States District Court for the Central District of California.