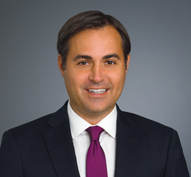 Christopher D. Belelieu is a litigation partner in the New York office of Gibson, Dunn & Crutcher.  Mr. Belelieu’s practice focuses on both complex commercial litigation and arbitration matters, including securities, antitrust, employment, class actions and contractual disputes.  He has represented both plaintiffs and defendants in federal and state courts, as well as in different arbitral forums.

Mr. Belelieu also represents and provides strategic advice to clients in the start-up space.  In addition, Mr. Belelieu advises companies on compliance with antitrust laws and has successfully secured antitrust regulatory approval for a number of mergers and acquisitions.  His clients include Perella Weinberg Partners, WeWork and The Wing.

Prior to joining Gibson Dunn, Mr. Belelieu was a partner at Boies Schiller Flexner LLP.  He began his legal career at Cravath, Swaine & Moore LLP.  He also served as a clerk for Judge Rosemary Barkett of the U.S. Court of Appeals for the Eleventh Circuit.  Mr. Belelieu is also a member of the Board of Directors for The Legal Aid Society of New York City.

Matters in which Mr. Belelieu has played a significant role include:

*Representations were made by Mr. Belelieu prior to his association with Gibson Dunn.