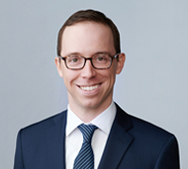 Addison Bennett is an associate in the Washington, D.C. office of Gibson, Dunn & Crutcher.  He practices in the firm’s Litigation Department.

Prior to joining Gibson Dunn, Mr. Bennett served as a law clerk to the Honorable Andrew D. Hurwitz on the United States Court of Appeals for the Ninth Circuit.

As a law student, Mr. Bennett served as a licensed student attorney in the University of Chicago Supreme Court and Appellate Clinic.  In that role, he assisted with petitions for certiorari and merits stage representation in the Supreme Court of the United States.  He also led a team of law students representing a client in the United States Court of Appeals for the Seventh Circuit, which included presenting oral argument in the case.

Mr. Bennett is admitted to practice law in the State of California and the District of Columbia.