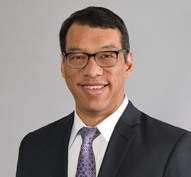 ​Frank P. Coté is an Of Counsel in the Orange County office of Gibson, Dunn & Crutcher LLP, where he practices as part of the firm’s Intellectual Property Practice Group.  Mr. Coté focuses his practice on patent litigation matters, with a particular emphasis in high-tech cases.

Mr. Coté received his law degree in 1999 from Loyola Law School in Los Angeles, where he was a member of Loyola’s International and Comparative Law Review and selected for the Scott Moot Court Honors Board.  In 1992, he obtained his Bachelor of Science degree in Electrical Engineering from Clarkson University, which he attended on a 4-Year Air Force ROTC Scholarship.

Before beginning his legal career, Mr. Coté served as an officer in the Air Force, where he held positions that honed his technical and managerial skills, including project engineer for Milstar, a multibillion dollar communications satellite system; assistant team leader for the International Space Station program; team leader for the Space Shuttle’s Main Engine program; and assistant professor of aerospace studies at the University of California, Los Angeles.

Mr. Coté has been recognized as a Super Lawyer (2012-2017) in intellectual property litigation by Southern California Super Lawyers and Los Angeles Magazine.  He is admitted to practice in the U.S. District Courts for the Central, Northern, Southern, and Eastern Districts of California; the Eastern District of Texas; and in the United States Courts of Appeals for the Ninth and Federal Circuits.  Before joining Gibson Dunn, Mr. Coté was a partner at Jones Day and Howrey LLP.