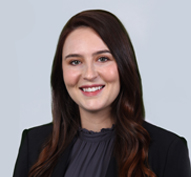 Katie Geary (formerly Henderson) is an associate in the Orange County office of Gibson, Dunn & Crutcher, where her practice focuses on complex commercial litigation at the trial and appellate levels.  She is a member of the firm’s Class Actions, Labor and Employment, Environmental Litigation and Mass Tort, and Appellate and Constitutional Law Practice Groups.

Ms. Geary represents clients in a wide range of litigation in federal and state courts.  She has represented clients in breach-of-contract, employment, mass tort, and consumer class actions and mass arbitrations, as well as other commercial and business disputes.  Ms. Geary has also drafted numerous merits and amicus briefs in the U.S. Supreme Court, federal circuit courts, and all levels of the California appellate courts, and has presented oral argument to the Ninth Circuit.

Ms. Geary is a member of the State Bar of California and is admitted to practice in the United States District Courts for the Central, Eastern, Northern, and Southern Districts of California, and the Ninth Circuit Court of Appeals.  She also maintains an active pro bono practice and has experience representing individuals and organizations with Fourth Amendment and other constitutional law related issues.