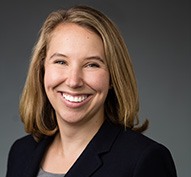 Justine Goeke is a senior litigation associate in the New York office of Gibson, Dunn & Crutcher.  Ms. Goeke represents multinational companies and senior executives across a variety of industries in complex commercial litigation, white collar criminal investigations and litigation, and enforcement actions and investigations by regulatory agencies, including the Department of Justice and the Securities and Exchange Commission.

Ms. Goeke has significant trial and motion practice experience.  She has conducted numerous witness examinations at trials and evidentiary hearings while serving as a key member of multiple successful trial teams.  Representative matters include:

Ms. Goeke has lectured at the New York City Bar Association regarding effective district court advocacy and for Lawline regarding the Federal Rules of Civil Procedure.  She has conducted compliance training for an investment banking firm regarding understanding and preventing insider trading, and has presented CLE classes on effective cross examination and developing third-party witnesses for trial.  Most recently, Ms. Goeke has been named as “Ones to Watch” by Best Lawyers in appellate practice for 2023.

Ms. Goeke maintains an active pro bono practice that includes impact litigation regarding police brutality and conditions of criminal detention.  She secured a favorable five-figure settlement from the City of New York on behalf of a former detainee at Rikers Island for violations of his constitutional rights.  She has successfully assisted New Yorkers in obtaining asylum and securing public housing repairs from the New York City Housing Authority.

Ms. Goeke is a member of the board of directors of Unique People Services, a non-profit focused on providing transitional and supportive housing to people with mental illness and developmental disabilities.

Ms. Goeke is admitted to practice in the State of New York, and before the United States District Courts for the Southern and Eastern Districts of New York.