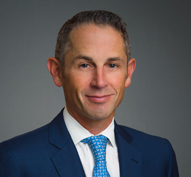 Mr. Greenberg was named a 2021 “Dealmaker of the Year” by The American Lawyer, noting his work for “an ad hoc group of lenders to Serta Simmons Bedding in a debt financing and exchange transaction that made waves in the capital marketplace.”  He has been consistently recognized as a leading restructuring lawyer by Chambers USA: America’s Leading Lawyers for Business, Chambers Global: The World’s Leading Lawyers for Business, The Best Lawyers in America® and New York Metro Super Lawyers.  He has also been named a “Leading Lawyer” and “Next Generation Lawyer” by The Legal 500 US,  a “Leading Global Bankruptcy & Restructuring Lawyer” and “Leading U.S. Bankruptcy and Restructuring Lawyer,” as well as one of the “500 Leading Lawyers in America” by Lawdragon,  a “Rising Star” by IFLR1000, as well as a Bankruptcy “MVP” and “Rising Star” by Law360.  Turnarounds & Workouts named Mr. Greenberg an “Outstanding Restructuring Lawyer” three times, most recently in 2021, and previously named him an “Outstanding Young Restructuring Lawyer.”  Chambers describes Mr. Greenberg as “a machine,” “a tremendous creditor-side lawyer with a dynamic practice” and “extremely bright, and he has a personality that allows him to negotiate deals with counterparties.”

Prior to joining Gibson Dunn, Mr. Greenberg was a partner at Jones Day from 2013 to 2019, where he also served as co-head of the Jones Day Business Restructuring & Reorganization practice. He began his career as an associate at Weil, Gotshal & Manges LLP in their restructuring practice.

Mr. Greenberg is Chairman of the Board of One Simple Wish, a not-for-profit assisting children in foster care in the U.S.