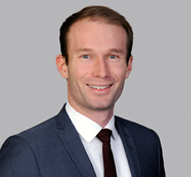 Alexander Horn is an associate in Gibson, Dunn & Crutcher’s Munich office. He is a member of the firm’s Litigation, Class Actions, Securities Litigation, Transnational Litigation and International Arbitration Practice Groups.

Mr. Horn has experience in a wide variety of complex litigation and international arbitration matters. This includes several contract, post-M&A, and corporate disputes before German Regional Courts as well as representing a financial services company in Germany’s largest arbitration to date.

Mr. Horn studied law at the Universities of Freiburg, Germany, and Grenoble, France, earning his law degree in 2013. During his legal clerkship he worked for the German Chamber of Commerce in Madrid, Spain, and at a U.S. law firm in Boston, MA. He passed his second state examination at the Hamburg Court of Appeals in 2015. Mr. Horn has been admitted as a German lawyer (Rechtsanwalt) since 2016. He obtained his LL.M. degree from the Duke University School of Law in 2019. While at Duke, he specialized in U.S. civil procedure, complex U.S. litigation, and alternative dispute resolution.

Prior to joining Gibson Dunn, Mr. Horn was an associate in the Litigation Department of a renowned U.S. law firm in Hamburg and Munich.

In addition to his native German, Mr. Horn speaks English, French and Spanish.