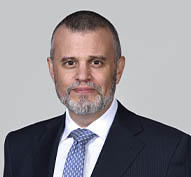 Raymond LaMagna is an attorney in the Los Angeles office of Gibson, Dunn & Crutcher and a member of the firm’s Litigation department.

Mr. LaMagna has been recognized by Super Lawyers as a “Rising Star” in Intellectual Property Litigation for 2012 to 2016.  Mr. LaMagna received his Juris Doctor at the University of Southern California where he was articles editor of the Southern California Law Review.  He graduated Order of the Coif and received the James C. Holbrook Award.  The Los Angeles Copyright Society also honored him with the Peter D. Knecht Award for excellence in contract, entertainment, and copyright law.  Mr. LaMagna has a Bachelor of Arts in Cinema/Television Production from the University of Southern California.  Prior to becoming a lawyer, he produced motion picture advertising and was a small business entrepreneur.

Mr. LaMagna is admitted to practice in state and federal courts in California, as well as the United States Court of Appeals for the Federal Circuit and the Ninth Circuit, the Eastern District of Texas, and the Northern District of Illinois.