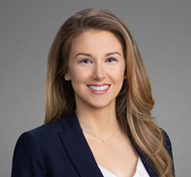 Before joining the firm, Ms. Ludtke clerked for the Honorable Carlos T. Bea of the U.S. Court of Appeals for the Ninth Circuit. She also clerked for Chief Judge Barbara M.G. Lynn of the U.S. District Court for the Northern District of Texas.

A South Florida native, Ms. Ludtke received her J.D. in 2019 from UCLA Law, where she was elected to the Order of the Coif. During law school, she served as an Associate Editor of the UCLA Law Review and as Vice Chairwoman of the Federalist Society. She also externed for the Honorable Otis D. Wright II of the U.S. District Court for the Central District of California.

Previously, Ms. Ludtke spent four years in New York City as a television news producer for major business and financial networks. She received her B.A. in Journalism and Mass Communication in 2011 from UNC-Chapel Hill, graduating with Highest Distinction and as a member of Phi Beta Kappa. As an undergraduate, she anchored and reported for the live newscast Carolina Week, wrote a weekly humor column for The Daily Tar Heel, and performed in a co-ed a cappella group. She speaks conversational Spanish and basic Korean.

Ms. Ludtke is admitted to practice in Texas.