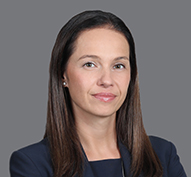 Ms. McCloskey earned her J.D. from the University of California Berkeley School of Law, where she was a member of the Order of the Coif and served on the California Law Review and Berkeley Journal of Criminal Law.  Ms. McCloskey clerked for Judge Valerie B. Fairbank of the U.S. District Court for the Central District of California and Judge John T. Noonan Jr. of the U.S. Court of Appeals for the Ninth Circuit.  Prior to attending law school, McCloskey worked as a journalist.