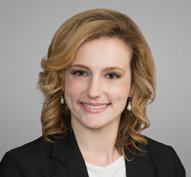 Prior to joining the firm, Ms. Morgan served as a law clerk to Chief Judge Rodney Gilstrap of the United States District Court for the Eastern District of Texas. During her clerkship, she assisted with the management of both patent and non-patent cases, including federal civil rights, civil asset forfeiture, trademark, insurance, and tax. She also worked on numerous judicial proceedings, including eight civil jury trials, one bench trial, and five Markman hearings.

Prior to clerking, she was an associate at McKool Smith, where her practice focused on complex commercial and intellectual property litigation.

Ms. Morgan is admitted to practice in the State of Texas, the United States Courts of Appeals for the Fifth Circuit and Federal Circuit, and the United States District Courts for the Northern, Southern, Eastern, and Western Districts of Texas.