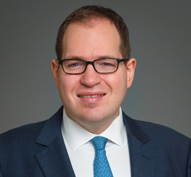 Michael Nadler is of counsel in the New York office of Gibson, Dunn & Crutcher.  Mr. Nadler’s practice focuses on representing both plaintiffs and defendants in all manner of civil litigation before trial and appellate courts, with a particular emphasis on complex commercial disputes and securities litigation.

Mr. Nadler has also maintained an active First Amendment practice.  He is currently counsel to Mary Trump in a dispute with her uncle, former President Donald Trump, relating to her best-selling book Too Much and Never Enough: How My Family Created the World’s Most Dangerous Man.  In recent years, he also represented CNN journalist Jim Acosta in obtaining an injunction requiring the White House to reinstate Mr. Acosta’s press credentials, as well as a local journalist in state and federal court matters relating to the journalist’s unlawful arrest and detention while covering a public demonstration.

Earlier in his career, many of Mr. Nadler’s pro bono efforts related to LGBTQ rights, including his representation of plaintiff Edie Windsor in the landmark Supreme Court case of Windsor v. United States, which held that a federal law refusing to recognize same-sex marriages was unconstitutional.  Mr. Nadler was also awarded Sanctuary for Family’s Above and Beyond Award for “outstanding pro bono representation and advocacy” in connection with his successful efforts as first-chair trial counsel.

Prior to joining Gibson Dunn, Mr. Nadler served as a clerk and counsel to Chief Judge Robert Katzmann of the Second Circuit Court of Appeals, and as a clerk to Judge Paul Crotty of the Southern District of New York.  Mr. Nadler earned his law degree magna cum laude from New York University in 2011, where he received the Maurice Goodman Memorial Prize for Outstanding Scholarship and Character.  He received his bachelor’s degree with honors from Columbia University in 2007.  He is admitted to practice in the State of New York, the Second and Third Circuit Courts of Appeals, and the Southern and Northern Districts of New York.