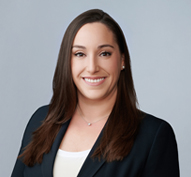 Lindsay M. Paulin is a partner in the Washington, D.C. office of Gibson, Dunn & Crutcher.  She currently practices in the firm’s Litigation Department.

Ms. Paulin’s practice focuses on a wide range of government contracts issues, including internal investigations, claims preparation and litigation, bid protests, government investigations under the False Claims Act, cost allowability, suspension and debarment proceedings, mergers and acquisitions involving government contracts, and compliance counseling. She has represented clients in disputes before the United States Court of Federal Claims, the Armed Services Board of Contract Appeals, the United States Government Accountability Office, and administrative agencies. Ms. Paulin’s clients include contractors and their subcontractors, vendors, and suppliers across a range of industries including aerospace and defense, information technology, professional services, private equity, and insurance.  Ms. Paulin has been recognized by Best Lawyers as “One to Watch”  for Administrative and Regulatory Law (2022-2023) and Criminal Defense: White Collar (2023), as well as being featured in Super Lawyers Washington D.C. as a “Rising Star” (2019-2022).

Ms. Paulin is admitted to practice law in the Commonwealth of Virginia and the District of Columbia.