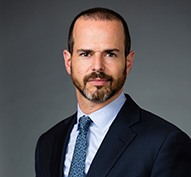 John M. Pollack is a partner in the New York office of Gibson, Dunn & Crutcher.  He is a member of Mergers and Acquisitions and Private Equity practice groups.  Mr. Pollack serves on the Finance Committee of Gibson Dunn.

Mr. Pollack focuses his practice on public and private M&A across a wide range of industries and his clients include private investment funds, family offices, publicly-traded and privately-held companies.

Mr. Pollack has been recognized as a leader in his field by Chambers USA, which praised him for being “fantastic to work with, very bright and very attentive to detail.”  In addition, he is consistently recognized by The Best Lawyers in America® in the area of Leveraged Buyouts and Private Equity Law, and was also named one of Law360’s Rising Stars of 2013 for Private Equity.

Recent transactions that Mr. Pollack has led include:

Mr. Pollack serves on The George Washington University Law School Board of Advisors, as well as is a member of the Law School’s Center for Law, Economics & Finance (C-LEAF) Advisory Board.

*Representations were made by Mr. Pollack prior to his association with Gibson Dunn.

Client Alert - March 18, 2020 | M&A Amid the Coronavirus (COVID-19) Crisis: A Checklist
Firm News - August 15, 2019 | Gibson Dunn Lawyers Recognized in the Best Lawyers in America® 2020
Webcasts - July 31, 2018 | Webcast: Strategies Regarding Corporate Veil Piercing and Alter Ego Doctrine
Article - December 13, 2017 | 10 Tips For Managing Litigation Risk In Sell-Side M&A
Article - November 15, 2017 | A Primer On ‘Locked-Box’ Deals
Article - October 27, 2017 | 10 Considerations When Selling to Private Equity Consortium
Top
This website uses cookies to provide analytics on user traffic. By continuing to browse our website, you consent to our use of cookies as set forth in our Cookie Policy. However you may visit Cookie Settings to customize your consent.
Cookie SettingsACCEPT
Privacy & Cookies Policy