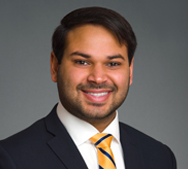 Harris Quraishi is a corporate associate in the New York office of Gibson, Dunn & Crutcher LLP.  He is a member of the Firm’s Mergers & Acquisitions, Capital Markets and Private Equity Practice Groups.

Mr. Quraishi is admitted to practice in the State of New York.