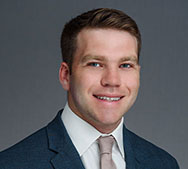 Mr. Reilly graduated from New York University School of Law in 2020 where he served as an Executive Editor on the Review of Law and Social Change Journal, and externed for the Honorable Patty Shwartz of the United States Court of Appeals, Third Circuit and the Honorable Freda L. Wolfson of the United States District Court, District of New Jersey.  Mr. Reilly also spent a semester advocating on behalf of the Institute of Policy Integrity as a Regulatory Policy Clinic at NYU Law.  He received his Bachelor of Arts in Government & Politics and Journalism from the University of Maryland, College Park in 2016.

Mr. Reilly is admitted to practice in the State of New York.

University of Maryland - 2016 Bachelor of Arts