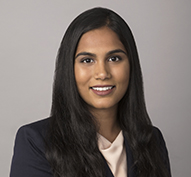 Ankita Ritwik is Of Counsel in the Washington, D.C. office of Gibson, Dunn & Crutcher LLP. She is a member of the Litigation and International Arbitration Practice Groups.

Ms. Ritwik has extensive experience in investment treaty and international commercial arbitration, including award enforcement in multiple jurisdictions.  She has represented a variety of clients with investments in Europe, Latin America, Asia and Africa, in the mining, energy, telecommunications, real estate, and manufacturing industries in international arbitration and enforcement proceedings.  She also has experience working with a wide variety of arbitral institutions including ICSID, UNCITRAL, ICC, SCC, HKIAC, SIAC, AIAC, TAI, DIA and OCC.

Ms. Ritwik is fluent in Hindi, and has a working knowledge of Spanish and French.  Ms. Ritwik is admitted to practice in the District of Colombia and the State of New York.