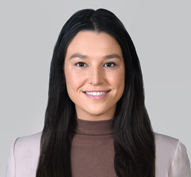 Ariana Sañudo is a litigation associate in the Los Angeles office of Gibson, Dunn & Crutcher.  Her practice focuses on labor and employment matters, with experience in single-plaintiff, multi-plaintiff, class and representative actions brought under federal and state law.

Ms. Sañudo earned her law degree in 2018 from the University of Southern California, Gould School of Law. While in law school, Ms. Sañudo served as the Executive Submissions Editor for the Southern California Review of Law and Social Justice, in which her article Under ICE: The ‘Bed Quota’ and Political Rhetoric in American Immigrant Detention was published, and as a Supervisory Student Attorney in the Immigration Clinic. In her third year of law school, she received the Edward and Eleanor Shattuck Award.

Ms. Sañudo received Bachelor of Arts degrees in Political Science and English from Boston College in 2014.

Ms. Sañudo is a member of the State Bar of California and is admitted to practice law before the United States District Court for the Central District of California.