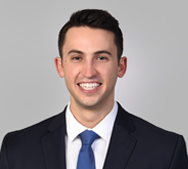 Sam Shapiro is an associate in the Orange County office of Gibson, Dunn & Crutcher LLP.  He currently practices in the firm’s Corporate Department.

Mr. Shapiro earned his law degree from the UCLA School of Law, where he served as an editor for the UCLA Law Review and was elected to the Order of the Coif.  While in law school, Mr. Shapiro served as a judicial extern to the Honorable Larry Alan Burns of the US District Court for the Southern District of California.  Prior to law school, Mr. Shapiro graduated with Honors with Distinction from UC San Diego, earning a Bachelor of Arts degree in Economics.

Mr. Shapiro is admitted to practice in the State of California.