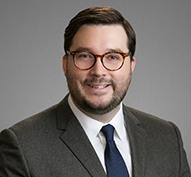 Graham M. Valenta is an associate in the Houston office of Gibson, Dunn & Crutcher, where he currently practices with the firm’s Mergers and Acquisitions, Oil and Gas, and Energy and Infrastructure practice groups and serves as a member of the Associates Committee.  Mr. Valenta represents oil and gas companies in upstream and midstream transactional matters, including acquisitions and divestitures of oil and gas assets and companies.