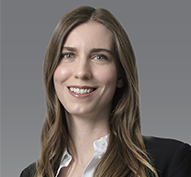 Emily M. Whitcher is a litigation associate in the Orange County office of Gibson, Dunn & Crutcher.  She is a member of the Intellectual Property Practice Group, focusing on patent and trade secret litigation.  She also advises clients on corporate matters and conducts freedom to operate analyses.

Ms. Whitcher has significant experience in all stages of litigation — ranging from claim investigation to achieving a successful jury verdict.  She has been instrumental in developing case strategy, managing complex discovery, taking depositions, preparing fact and expert witnesses to testify, and representing clients at trial.  She has litigated high-stakes cases for both plaintiffs and defendants in a variety of forums, including federal courts, at the Patent Trial and Appeal Board (PTAB), at the International Trade Commission (ITC), and before arbitration panels.  She leverages her technical background in bioengineering to counsel clients in a wide range of industries, including biotechnology, pharmaceuticals, medical devices, video streaming technology, semiconductors, software, electronics, mechanical devices, virtual reality, and interactive entertainment.

Ms. Whitcher has obtained a favorable Final Determination in a high-stakes patent infringement ITC Investigation.  She has coordinated complex discovery requiring large document reviews and numerous depositions in a short period of time.  She has been instrumental in developing and defending against patent invalidity theories and obtaining the discovery needed to prevail.  Ms. Whitcher also was a key member of a trial team that secured a $500 million jury verdict in a trade secret case.  Through her work on trade secret cases, she has developed an expertise in forensic analysis and works closely with forensic consultants and experts to gather and analyze forensic data.

Prior to joining Gibson Dunn, Ms. Whitcher was an associate at Jones Day and Skadden, Arps, Slate, Meagher & Flom.

University of Pennsylvania - 2012 Bachelor of Science

University of Pennsylvania - 2012 Master of Science