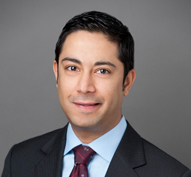 Amer S. Ahmed is a partner in the New York office of Gibson, Dunn & Crutcher.  He is a member of Gibson Dunn’s Litigation; Appellate and Constitutional Law; and Media, Entertainment and Technology Practice Groups.  Mr. Ahmed’s practice focuses on representing institutional and individual clients in a variety of high-profile litigation matters at the investigatory, trial, and appellate levels, ranging from witness preparation to product-liability actions, white-collar criminal defense, and commercial disputes.  He recently helped secure the reversal on appeal of a multi-million dollar punitive damages verdict in a failure-to-warn case, as well as the dismissals of a billion-dollar ERISA case in New York federal court and RICO allegations in California.  Mr. Ahmed also has significant experience handling defamation lawsuits as counsel for both defendants and plaintiffs.  In addition, he engages in substantial pro bono and volunteer efforts at Gibson Dunn, resolving satisfactorily a copyright-infringement suit brought on behalf of a Brooklyn-based artist and obtaining asylum in the United States for a Syrian refugee.

Prior to joining Gibson Dunn in August of 2012, Mr. Ahmed spent seven years as an associate at Williams & Connolly LLP, where he handled a variety of complex litigation matters, including the representation of pharmaceutical companies in product-liability suits, administrative challenges to agency action, false-advertising allegations, defenses to libel claims, and criminal appeals.  He successfully defended The Washington Post against a defamation lawsuit in federal court, and a consumer-products company against deceptive-advertising claims in California.  While at Williams & Connolly, Mr. Ahmed also served as a Co-Chair of the Legal Aid Society’s annual Generous Associates Campaign and was recognized by the Washington Lawyers’ Committee for Civil Rights and Urban Affairs for his stewardship of a volunteer teaching program at an inner-city public school.

Mr. Ahmed graduated from Columbia Law School where he was named a Harlan Fiske Stone Scholar and served as an articles editor of the Columbia Law Review.  He published his academic note, The Last Twist of the Knife: Encouraging the Regulation of Innovative Surgical Procedures, 105 Colum. L. Rev. 1529 (2005).  Mr. Ahmed received his Bachelor of Arts in Human Biology, with distinction, from Stanford University, where he was a President’s Scholar and was elected to the Phi Beta Kappa Society.