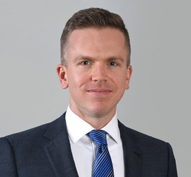 On top of his civilian practice, Mr. Brown is a Captain in the U.S. Army Reserve, where he serves as a Judge Advocate and holds an active security clearance.

Prior to joining the firm, Mr. Brown clerked for Judge Carlos T. Bea on the U.S. Court of Appeals for the Ninth Circuit, and before that for Judge R. Gary Klausner on the U.S. District Court for the Central District of California.

Mr. Brown received his law degree from the UCLA School of Law, where he was elected to the Order of the Coif.  At UCLA, Mr. Brown was named a Michael T. Masin Scholar and served as a Senior Editor on the UCLA Law Review.  He also served as a cybersecurity research assistant for Professor Kristen Eichensehr, and as a judicial extern for Judge Arthur L. Alarcón on the U.S. Court of Appeals for the Ninth Circuit.  Mr. Brown received his bachelor’s degree magna cum laude from The George Washington University’s Elliot School of International Affairs with a functional focus on security policy and a regional focus on the Middle East.