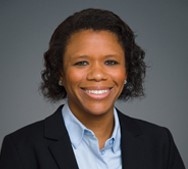 Christina M. Brown is of counsel in the New York office of Gibson, Dunn & Crutcher, and is a member of the Business Restructuring and Reorganization Practice Group.  Ms. Brown represents a diverse array of parties in bankruptcy and insolvency related matters, financings, debt exchanges, and in-court and out-of-court restructurings.

Prior to joining Gibson Dunn, Ms. Brown was counsel at Akin Gump Strauss Hauer & Feld LLP in the firm’s New York office where she was a member of the Financial Restructuring Group.  She previously practiced in the Restructuring Group at Weil, Gotshal & Manges LLP.

Ms. Brown received her B.S. in Engineering and Architectural Design from Stanford University in 2007 and her J.D. and LL.M. from Duke University in 2012.  Prior to entering the legal profession, Ms. Brown worked as a transportation engineer in the Los Angeles area.

Ms. Brown is admitted to practice in the State of New York and before the United States District Court for the Southern District of New York.