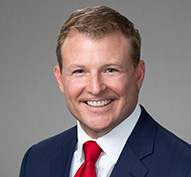 Trey Cox is an accomplished and sought after advocate and trial lawyer and Co-Partner-In-Charge of the Dallas office.  He has spent his entire professional life as a courtroom attorney and litigator helping clients resolve large, complicated and often high-profile business disputes.  His courtroom experience is broad and extensive.  He has tried over 35 cases involving trade secrets, breach of fiduciary duty, securities fraud, product liability, trademark, insurance coverage, energy, oil and gas and partnership disputes.  He has achieved success for a variety of clients – both defendants and plaintiffs, from big energy companies to a lone individual businessman battling the odds.

Mr. Cox is consistently recognized as one of the top commercial trial lawyers in America. Chambers USA reports that Mr. Cox is “an excellent trial lawyer who is great with clients and on his feet.” A client says: “He’s extremely well prepared and a great presenter who brings a lot of energy and focus. He’s very impressive.”  Recognized for many years by Chambers USA as a “Leader in His Field,” Chamber USA elevated Mr. Cox to its most elite “Band 1” category as one of a handful of the leading trial lawyers in Texas and singled out Mr. Cox in the Texas Trial Lawyers “Spotlight Table,” a recognition given to individuals to highlight them as a select group for their particular achievement. Mr. Cox is the youngest trial lawyer in Texas history ever to be so spotlighted.

For over a decade, he’s been listed as one of the “Best Lawyers In America”, one of the “Top 100 Super Lawyers” in Texas and a 2023 Benchmark “Texas” and “Commercial Litigation Star”.  He is a fellow of the American Board of Trial Advocates and the Litigation Counsel of America.  His jury trial experience and courtroom success have earned him the distinction of being double Board Certified in Civil Trial and Civil Pre-Trial by the National Board of Trial Advocacy.

Mr. Cox’s cases have been featured in The Wall Street Journal, The New York Times, The Los Angeles Times, The Dallas Morning News, Bloomberg News and the Houston Chronicle, among many other publications. His last trial – a commercial plaintiff-side partnership dispute – was recently recognized as one of the Top 20 Verdicts in Texas.  His trial experience provides a real advantage in focusing the entire preparation process on what matters most – how to effectively and efficiently marshal the proof to prevail on the key issues.

Mr. Cox is active outside of the courtroom as well; he is committed to serving the legal profession. Progressive and innovative, he has earned a reputation as a thought leader in using technology to create clear, memorable and persuasive jury communication.  His focus is on courtroom presentations that make judges and juries take notice.  He has lectured throughout the country and authored numerous legal articles, white papers, and books.  He has served as a featured lecturer at many of the nation’s top law schools, including University of Virginia School of Law, University of Texas School of Law and SMU Dedman School of Law.  Following each of his jury trials, he interviews the jurors to understand and analyze their decision-making and thought process.  With the help of a former Texas state court judge, he has turned these interviews and insights into a book, The Jury Rules: The Rules Every Juror Wants Every Trial Lawyer To Know and Use.