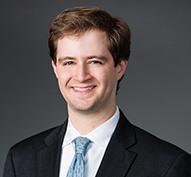 Lee R. Crain is a litigation associate in the New York office of Gibson, Dunn & Crutcher.   Mr. Crain’s practice focuses on a broad-range of high-stakes trial and appellate litigation in both federal and state courts.  Mr. Crain has experience litigating cases involving media and entertainment, tech, employment disputes, and the First Amendment.  Mr. Crain also has significant experience with crisis counseling and fast-paced, emergency litigation and has led teams seeking or defending against temporary restraining orders and preliminary injunctions in multiple matters.

Mr. Crain has argued before federal and state courts (trial and appellate) in high-profile cases, including defeating a motion for a temporary restraining order filed against a former Prime Minister of Mongolia in State Agency for Policy Coordination v. Batbold (N.Y. Sup. Ct.), prevailing on a preliminary injunction motion in the firm’s historic First Amendment victory in Turner v. USAGM (D.D.C.), as well as successfully defending against motions to dismiss certain claims in litigation filed against members of the Trump Administration in Buchanan v. Trump (D.D.C.).  Mr. Crain has participated as a lead associate on some of the firm’s recent historic victories, including CNN v. Trump, Karem v. Trump, Turner v. USAGM, and Roman Catholic Diocese of Brooklyn v. Cuomo, and has been a core member of multiple trial teams.  Mr. Crain’s work has been covered in The Washington Post, NPR, CNN and other outlets both domestic and foreign.

Mr. Crain is the recipient of Gibson Dunn’s 2020 Frank Wheat Memorial Award, “given annually to individual lawyers and teams that have demonstrated leadership and initiative in their pro bono work, obtained significant results for their pro bono clients, and served as a source of inspiration to others.”  Mr. Crain received the award for his work on Turner v. USAGM, which resulted in a successful preliminary injunction forbidding political interference in the journalism of Voice of America and its sister outlets and establishing that government-employed journalists have First Amendment rights.  The firm’s award further recognized Mr. Crain’s “brilliant media strategy to ensure the Firm’s clients their rightful place as heroes of the story.”   Mr. Crain and his colleagues also received recognition as runner-up Litigators of the Week for the victory in Turner.

The Best Lawyers in America® has recognized Mr. Crain as “One to Watch” in Appellate Practice from 2020-2023.

Mr. Crain is Co-Chair of the firm’s Associate Business Development Committee and previously served as a member of the Ethics Committee.