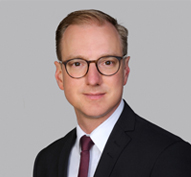 Andreas Dürr is an associate in the Munich office of Gibson, Dunn & Crutcher. He is a member of the firm’s White Collar Defense and Investigations and Litigation Practice Groups.

Mr. Dürr has experience in defending clients in criminal and regulatory proceedings with a particular emphasis on white collar and tax criminal law. He advises on compliance issues and carries out internal investigations. His practice also includes civil litigation, particularly in connection with criminal and other misconduct.

Mr. Dürr studied law at the Ludwig Maximilian University in Munich, Germany, and the University of Castilla-La Mancha in Toledo, Spain. After passing his first state examination in 2012, he worked as a research assistant at the Chair for German, European and International Criminal Law and Criminal Procedural Law and White Collar Crime at the Ludwig Maximilian University. In 2014, he worked at the International Criminal Tribunal for the former Yugoslavia in The Hague, Netherlands, on a Carlo Schmid scholarship granted by the German Academic Exchange Service (DAAD). In 2016, he was awarded the Magister Juris degree from the University of Oxford, St. Peter’s College, United Kingdom. Mr. Dürr carried out his legal training at the Higher Regional Court of Berlin, Germany, which included working at the German Federal Ministry of Finance (EU financial control and fraud prevention), a large international law firm in Berlin, and a mid-sized German law firm in Munich. In 2018, he passed his second state examination and, in addition, obtained his doctor’s degree. He has been admitted as a German lawyer (Rechtsanwalt) since 2019.

Prior to joining Gibson Dunn, Mr. Dürr was an associate in the White Collar and Compliance department of a major German law firm.

In addition to his native German, Mr. Dürr is fluent in English, French and Spanish.