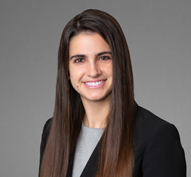 Emily Jorgens is an associate in Gibson, Dunn & Crutcher’s Dallas office. She practices in the firm’s Litigation Department at both the trial and appellate levels.

Before joining Gibson Dunn, Ms. Jorgens served as a law clerk to the Honorable Diane P. Wood of the United States Court of Appeals for the Seventh Circuit.

Ms. Jorgens received her J.D. with highest honors from the University of Texas School of Law, where she was named the Grand Chancellor of her graduating class in recognition of having the highest GPA in the class after two years. Ms. Jorgens served as a Featured Content Editor for the Texas Law Review and was elected to the Order of the Coif.

Ms. Jorgens is a member of the State Bar of Texas. She is also admitted to practice before the Seventh Circuit.